skip to main | skip to sidebar

Chris has decided to accept the head coach position for the Roswell,NM team. He is also on the board of directors for the Peco league.
Posted by scar17xx at 3:30 PM No comments:

Chris is still in Texas and he is now making very good progress with his team.They had a total of 10 wins at the halfway mark. They had a allstar game at the halfway mark and there were a total of 4 teams, 2 teams teamed up and played against the other 2 teams that teamed up. Chris Paterson's team, the Desert Valley Mountain Lions, teamed up with The big Ben Cowboys and they won the game 9 to 1.
Posted by scar17xx at 5:11 PM No comments:

The Past of Chris

Many of you know what Chris Paterson is up to right now that he is a 24 year old baseball player that right now is coaching a minor league team in Texas...but many of you do not know the Past of Chris Paterson....Well here it is:

Chris Paterson was born in Fontana, CA. He attended Holy Rosary Academy in Kindergarten and then transferred to Our Lady Of The Assumption in 1st grade until 8Th grade. In his high school years Chris Paterson attended Redlands East Valley where he was a member of the schools first Citrus Belt League Title while playing on the same team as the Atlanta Braves Tommy Hansen. Chris played one year of Junior College Baseball at Barstow Community College where he earned honorable awards. Later on during his college time Chris attended North Dakota State University (NDSU) in Fargo, North Dakota where he played Division I baseball and served as a reliever and pitched a no hitter against Creighton and posted a career run average of 4.26. He earned many awards including a Ping National Spotlight Player. He graduated from NDSU in 2008 with a degree in Behavioral Studies. After college he was offered many Independent contracts but decided to pursue his career in the international circuit.Chris played a season for the French Elite Club the Montingy Cougars as a first baseman,starting pitcher,and a outfielder and then played/coached team in Australia for the Doncaster Dragons Baseball Club as a pitcher and an outfielder and he helped them finish in the middle of the pack after finishing last the previous season and he coached the leagues 16 and under team and coached them to get a respectable record. Chris then coached the rest of the winter for the California winter league along with Darrel Evans,Greg Caderet,Tim Blackwell,Brian Giles, Mac Suzuki,and Jon Warden. When the season finished Chris decided to sign with the powerhouse German team the Regensberg Legionare when he was there he was in the top 5 of just about every pitching category and he had a 4-0 record. He then decided to come coach for the Desert Valley Mountain Lions and is where he is today. Chris Paterson is just one example of why you should pursue your dreams because he was just once a Catholic school boy and now he travels the world playing baseball because he pursued his dream!!!
Posted by scar17xx at 12:21 PM No comments:

Chris has visited many places while playing baseball some of them include:
France
Australia
Geremany
Texas
Posted by scar17xx at 12:02 PM No comments: 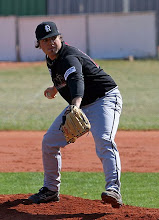